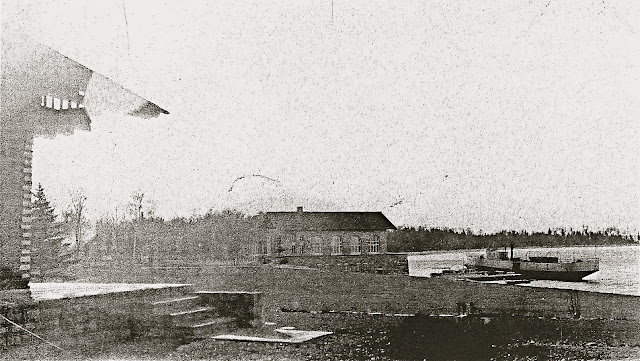 What is this vessel at the boathouse dock?

Photos of at least half a dozen different vessels of substantial length shown at the Rock Island dock are archived in the Thordarson collection.

Here is another head-scratcher, as it doesn't look at all familiar as a Washington Island vessel.

In early April we asked friend Eric Bonow, once again, to give us his opinion.  From the James L. Oberstar, while crossing Lake Erie, he sent this information:

"Well, that's not too hard a mystery.  That looks like the Marold II, originally Alexander Winton's yacht LaBelle.  He was a Cleveland industrialist, early in the auto and engine business.  The yacht was sold and eventually converted to a freighter in 1925.  It was owned by the Hill family from Fish Creek and elsewhere, including Washington Island, and ended her days when they were salvaging gasoline off a tanker grounded across the lake near Beaver Island.  That explosion in 1937 finished her off.  I've included the data sheet from the archival collection at Bowling Green, which has a picture of it as a freighter, but not in the original configuration.

"The internet has slowed to a crawl here, but I hope to find an appropriate picture to include. --- It is now "later" and while the internet is somewhat faster I was unable to find a picture of the LaBelle as the LaBelle.  However, if you discount the cabin in the photos, the hull us very much like many of the early, large steam (and in this case gasoline / diesel) yachts.  Long, low, skinny, with masts and a central stack.

"There were quite a few of these yachts put to use.  The Thistle of the Hart Line was one, and another was the Winyah that ran the north shore of Lake Superior to drop off supplies at commercial fishing camps and bring the fish to Duluth for shipment to market.  that boat had been Andrew Carnagie's yacht."

Thanks to one of our readers, here is a link to the Marold disaster that you may find interesting: