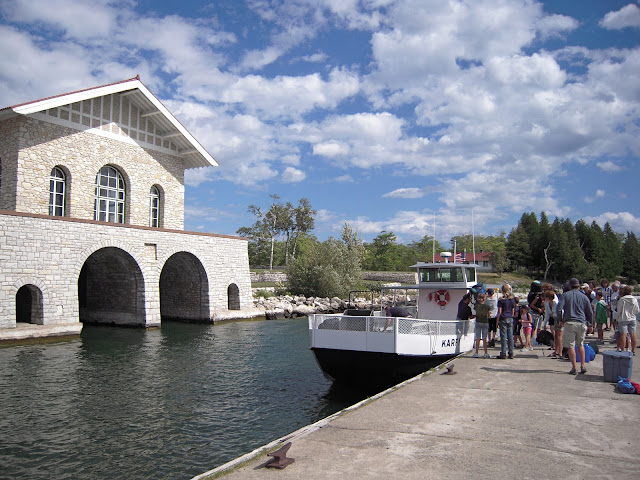 Washington Island Ferry Line, Inc. president Hoyt Purinton announced the purchase of the Karfi from Jeff Cornell of Washington Island in the late afternoon, Wednesday, November 14, 2012.
The Karfi is a 36-foot steel vessel built in Escanaba in 1967 to ferry campers, hikers and day visitors between Jackson Harbor, Washington Island, and Rock Island State Park.  During each of the past 46 summers the Karfi was operated by members of the Cornell family.
The Karfi was originally constructed for Jim Cornell, a former Washington Island commercial fisherman.  At age 67, in 1981, Jim sold the Karfi operation to his son, Jack, who then operated it for the next 20 years.  In 2002, Jack sold the vessel to his son, Jeff Cornell.   Jeff had crewed for both his grandfather Jim and his father as a youngster, starting at age 12.
Jeff operated Washington Island Ferry Line vessels as a captain from 1989 through 1999.  He then operated the WDNR fisheries research vessel Barney Devine for several years prior to purchasing the Karfi.  He will rejoin Washington Island Ferry Line in the spring of 2013 as ferry captain on the Northport ferry route.
Cornell said that although he enjoys piloting the Karfi’s daily trips to Rock Island, he’s also looking forward to a greater variety of routes and challenges.  As one of several Ferry Line captains, he’ll be able to schedule a summer’s day off now and then, too, something he couldn’t easily do as the sole owner-operator once the Karfi's season schedule began.   However, Cornell may still pilot the Karfi at least part of the time for the Ferry Line. 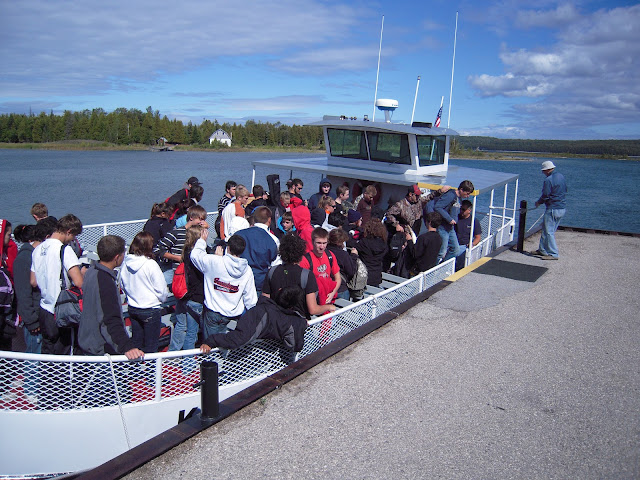 School group of campers about to disembark at Jackson Harbor's State Park dock.

Are changes anticipated for the Rock Island State Park route now that the Karfi is no longer a Cornell family operation?

“Despite its number of seasons, the Karfi has been well maintained and is in immaculate condition.  We intend to operate the Karfi to Rock Island with the same standards for public safety and spotless vessel condition as did the Cornells, with a schedule similar to that of past years.   One new consideration may be to offer a combination ticket for both the Washington Island and Rock Island ferries, a convenient, single transaction that would also be a savings for the customer. 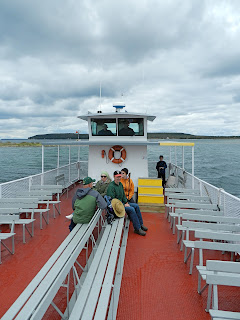 “The Ferry Line is looking forward to serving Rock Island State Park visitors,” Purinton said.  “Many people return every summer to hike, camp, or visit the Thordarson boathouse or the Pottawatomie Lighthouse.   As an island park, it’s one of our state’s most unique parks.  We believe there are many people who, for various reasons, have never visited Rock Island, and we’d like to reach those people and encourage them to visit.

“At the same time, we’re also pleased to welcome back Jeff Cornell as a Ferry Line captain.  He’s familiar with our operations, and he'll fit in well.  Starting in early spring of 2013, Jeff will pilot Washington Island ferries in summer as well as winter.”
-  Dick Purinton
Note: Original post from Ferry Cabin News: November 14, 2012