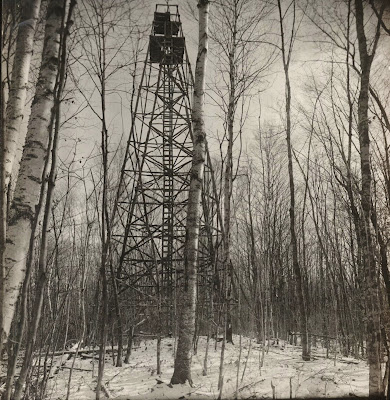 Last Friday I published information on this site about a Rock Island photo album  given as a gift by C.H. Thordarson to a friend, H.R. Holand.

One photo showed a tower on Rock Island that appeared to be located on a high bluff of the island's interior.  When was it built, why was it built, and how was it used, and what happened to it?  These were questions that arose from that photo, and the only information I was able to obtain was from retired Rock Island State Park manager Kirby Foss.  He said it was a survey tower, and that the location had never been found.

Eric Bonow responded with what appear to be answers to most of those questions.  Eric sails as Mate for the Interlake fleet, has a degree in "industrial archeology," and worked for a time with a survey company in the Superior, WI area.  His research and emailed response offered the following information, which I'm reprinting word-for-word rather than attempting to summarize.

"Thank you for the blog entry on Rock Island.  Every so often you throw down the gauntlet, so to speak, and I have to pick it up.  Here goes.  What you say regarding the original land survey of the Door County area being done very early is true.  For the most part, those guys hacked their way through the woods, setting section corners and the like.  However, the U.S. Lake Survey did their work by triangulation, and they had a series of stations covering the midwest, and they tied these stations in to other networks which covered the country.  There were orders of stations.  A First Order Station would be used in the triangulation through from one point to another.  First Order surveys were of very high accuracy, and had fairly long legs.  There were also Secondary and Tertiary Surveys (and monuments) to map out local areas.  The legs of these triangles were shorter, and consequently more stations were established.  These surveys led to the production of the charts we still use today. 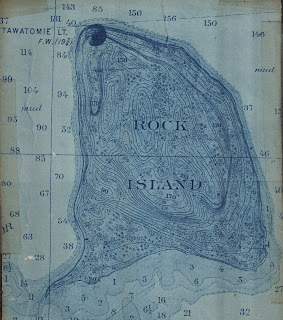 "It so happens that a First Order Station was established on Rock Island in 1864.  In the Annual Report of the Chief of Engineers for 1902 the U.S. Lake Survey positions for all of these stations are given.  From the Rock Island station azimuths are given to the stations at Door Bluff, Bark River and Peninsula Point.  That meant that towers had to be visible at these points as well.  Unfortunately the map which accompanied the report was torn off in my copy  and the part showing these stations is missing.  These stations were used more that once.  For example, in the report that I have (which lists all these stations), there was, in 1901 a resurvey of the Apostle Islands.  In this report the writer enumerates the methods used, types of stations established, etc.  Consequently, if a person had the time (I don't) or the inclination (I do) to look through other reports, the last probable use of the tower on Rock Island could be determined.

The monument has been in use since its establishment in 1864, and a current datasheet on it is attached.  I've plotted the position on a map and included that as well.  With this information, it would be a simple matter to enter the coordinates into a hand-held GPS and take a metal detector along and find the monument.  According to the info, it is buried 3' below the ground, mostly in an effort to protect it.  Once the monument is found, it would be another simple matter to search in a radius around it to see if any remains of the base of the tower exist.  I would guess that the tower was removed so that the material could be used elsewhere.  However, these towers had to be very stable so some sort of base must have been constructed. As an aside in this, First Order monuments are still established, but it is done with a GPS unit.  The unit sits on a station for a given period of time (usually pretty long), and then the electronic record is taken into the office and a computer post-processes the info an comes up with an accurate position. 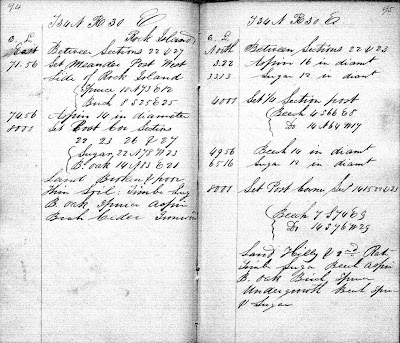 "To digress a little, since section 23 of T34N, R30E lies entirely on Rock Island, I looked up the original survey notes and plat which were done in March - April of 1835.  According to the notes, this line was run north from the SW corner, and posts were set at the W 1/4 of section 23, and then again at the NW corner.  The south line of the section was run, and points along it were noted, such as where they encountered a swamp, and when it was left.  I've included those notes as well.

"Since the US Lake Survey used triangulation to set their monuments, and the reports tell of the towers and equipment used, I feel pretty confident in saying that the tower shown in the pictures was used by them.  This is substantiated further by the continuation of the monument up to present time.  It would be a lot of fun to scout out this area and see what's there.  Also, since the Public Land Survey ran the lines I doubt that this would have had anything to do with the establishment of the monuments used in that survey.  That was an interesting exercise for a Sunday morning and early afternoon (before and after church, and lunch too).  Thanks for throwing that out there.  I'll have to look over these photos the next time I visit the Archives."

And in a follow-up email, Eric wrote:

"Since those stations were so far apart, I think that they did a lot of that surveying at night.  A more clear atmosphere, and then they would have some sort of "something" up there that burned.  Of course in 1864 background lights wouldn't be the problem they are today."


Thanks for the information.  Perhaps we'll be taking a trip to Rock Island one day to find that location.   -  Dick Purinton